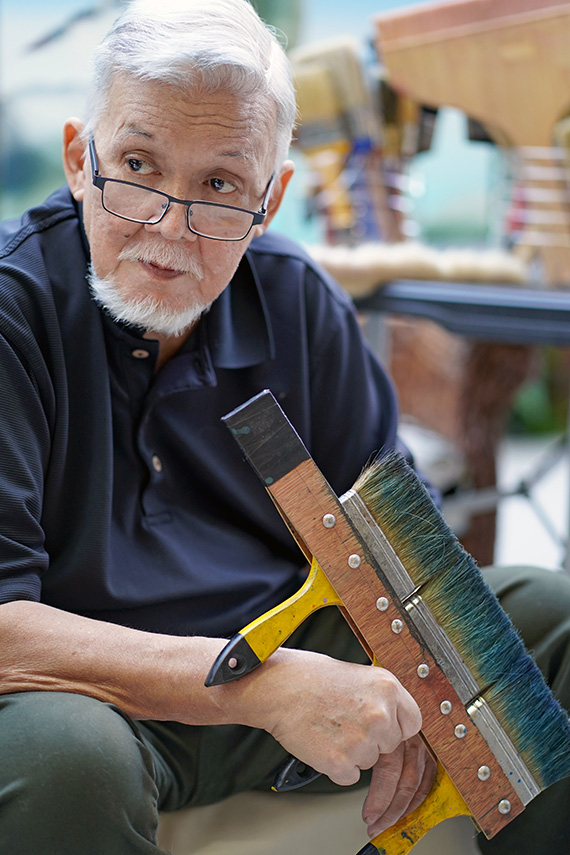 There is a theory that in every human being’s heart beats the rhythm of home. Every heartbeat thumps to the tune if his roots. This explains why Justin Nuyda is always in constant search for mindscapes. He paints a picture of the sights and captures the sounds within a mind that is not lost, but simply in search. Thunderously silent and vibrantly calm, his works breathe a different air. Gripping, hypnotic, even puzzling at times, he brings forth an awareness of a creative attempt to photograph the internal world in which the mindscape search takes place. His abstractions are trembling in the brink of reality; from surreal to real, turbulent to placid, and barren to beautiful.

Leading modern and contemporary abstract painter Justin Nuyda [b. 1944] possesses a career that spans over five decades of prolific development. Nuyda received his Bachelor of Fine Arts from the University of Santo Tomas (1966) and is among the early recipients of the Cultural Center of the Philippines’ Thirteen Artists Award (1972). He has also co-founded the renowned Saturday Group of Artists, a formidable force in the Philippine art scene of the 60’s and 70’s. Luminary members include the likes of National Artists Jose Joya, BenCab, and Hernando R. Ocampo; Masters such as Onib Olmedo, Galo Ocampo, Eduardo Castrillo, and Araceli Dans; and, art critics such as Dr. Rod Paras-Perez, and Alfredo Roces.

Alongside art, Justin Nuyda is also a long-time lepidopterist specializing in Philippine butterflies. Having started collecting butterflies at the age of 7, he has described over a hundred species and subspecies. This passion for jeweled insects and the terrain they thrive in has served as a major inspiration for his works over the past fifty years.